The ongoing “Covid-19 pandemic” campaign is a full-scale Satanic rebellion against the creator.   That is because when a government is actively fighting to suppress the truth, then it’s working against the creator of the truth, i.e. the creator of the universe.   Right now the Satan-controlled corporate media and their slave governments are lying about the pandemic and actively murdering those who try to expose it.   History shows that when governments fear the truth and increase repression, their days are limited.   These are the conclusions reached after a really eye-opening visit to family and friends in Canada.   These people still live inside the fake corporate news bubble and actually believe that Covid-19 is a real danger despite all the evidence to the contrary.

My sister, who is a specialist in epidemics and head of medicine at a major university hospital in Canada has been on the frontlines of this so-called epidemic since the beginning.   Her conclusion is that there has been a vast over-reaction to something that fails to meet the definition of a real pandemic.   According to her, the overall death rate from respiratory diseases (pneumonia, tuberculosis, influenza, “Covid-19,” etc.) is lower than in average years.   However, the suspension of such things as cancer screening and treatment of other illnesses means it is “too early to tell if the overall death rate is dropping.”  Either way, it is clear what we are dealing with is not a medical issue but a political one.

What is interesting is that until I actually went to Canada and talked with her, it turns out all my emails asking her about this in the past had been blocked by a third party.   In other words, government agencies are censoring private emails to suppress medical truth.

The other observation is how easy it was to take a stable democracy like Canada’s and turn it into a fascist or communistic state of informers.   For example, I remember how during the cold war Western propaganda said the fact Russians had to show ID for domestic travel was a sign of communist repression.   Guess what, now you need a picture ID to travel inside Canada.   Also, when I arrived the border police told me I needed to self-quarantine for two weeks or face criminal charges.   That was no problem since I was staying at my cottage by the lake anyway.   What was interesting is that people like my sister-in-law and the lady at the local store were ready to inform on me if they saw me in public.   They turned into informants because they sincerely believed they were saving lives from a “pandemic.”  This despite the fact we are dealing with something that is about as deadly as a common cold.

Another observation came from a friend who works in the film industry in LA.   He says a friend of his was hospitalized with “Covid-19,” and that he only survived his hospital stay because he refused to go on a ventilator.   He says everyone who was put on a ventilator died.   So, we have a testimony, backed by information send by various readers, that some hospitals are actively murdering people in order to maintain the aura of fear and control they need to stay in power.

Also, the mindset of people who are part of the new-age Covid-19 religion shows how a majority of the people have lost the ability to think rationally or independently.   Even if we take a huge leap of faith and believe this mild, cold-like virus is deadly, there is no medical reason to wear a mask while jogging, biking, or driving alone.   And yet, people are going through a form of self-mutilation to do just that.

Of course, my cool-aid drinking friends who, despite the evidence of their own eyes, believed the official line said, “There is no way there could be a conspiracy so vast.”

So, let us look at who in the real world has the power to carry out such a campaign.   The forensic trail of evidence leads to the P3 freemasons and the still existing Roman Empire.

The Covid-19 totalitarian campaign we are now witnessing can be traced to military-type hierarchical organizations controlled by the Romans.  The most important of these are medical associations.  Western medicine evolved out of military medicine.  That is why there is a surgeon “general.” At the top of this pyramid is the WHO and the UN with its unelected “Secretary-General.”  If doctors refuse to go along with orders they lose their medical licenses and thus their ability to earn a living.  So, most doctors go along.

Another thing they control is international infrastructure entities such as airports and ports.  Take a look at this photo of Narita airport (one of the worlds’ busiest) I took at the height of the summer travel season.  It was nearly deserted.  This is real economic sabotage at work based on lies. 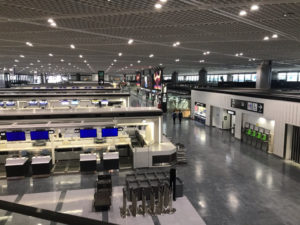 Here’s a photo of the nearly deserted testing center at Narita. 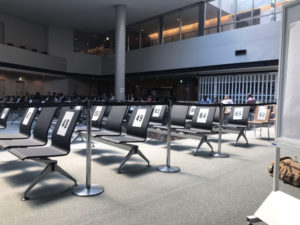 The return flight to Japan was on a jumbo jet that only had 28 passengers, only three of whom were staying in Japan.  If this continues, it is only a matter of time before most world airlines go bankrupt.

When I arrived in Japan I was told I could only stay in the country if I took a “Covid-19 test.” Since it only involved spitting into a container (I would have resisted any form of an intrusive test) I agreed and came out three hours later with a negative test result.  What was interesting about the whole experience is that it was clear that the Japanese authorities (i.e. the people doing the testing at the airport) were clearly just going through the motions to appease foreign overlords.

In any case, the entire pandemic campaign is, despite its intensity, a sign of desperation and defeat on the part of the controllers.  Here is what they are trying to hide:

The remainder of this article is only available to members of BenjaminFulford.net